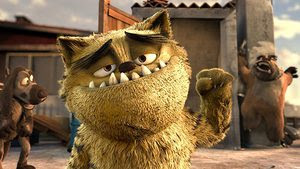 A word of warning at the start this film is not for kids, one of the first words is motherf&%  However BAD CAT is going to delight adults with a twisted sense of humor.

This  is a vile vulgar foul mouthed and hysterically funny adults only comedy based on a long running comic. This is a wonderfully done smile producing film that is pefect for kicking back and enjoying with or without friends.

The plot of the film has Shero hanging out with his best friends a rat and sea gull trying to get food and booze. While Shero's buds are off trying to get some drinks Black appears and tells Shero that there is a new cat in town he simply must sleep with. The assignation goes horribly wrong and the cat ends up dead as does the cat owner a vengeful cartoonist. This being a cartoon and a world where cats and people talk to each other it isn’t long before the cartoonist is back from the dead hunting a certain cat.

The best thing I can say is I want a copy of this film. Its one of the best animated adult comedies I’ve ever seen. Its beyond South Park without the social commentary. Its pure low brow humor with frequent F Bombs, sex, violence and jokes that are way cleverer than the majority of ones the best American films. Actually despite being full of low brow jokes they are incredible clever and proff that there is nothing like a really good poop joke done with some intelligence. Its so clever and so funny I was roaring with laughter from start to finish.

I do have to wonder why this film looks so good. No doubt produced for a fraction of the budget of a Disney or Pixar film its looks as good if not better. Why is that? What magic has the production house come up with that allowed such a finely crafted film to look as good as it does.

I love this film. A must see for anyone who likes funny films and doesn’t mind the laughs coming from the gutter.

One of the great films at Fantasia.

Lets hope this gets a wide release
Posted by Steve Kopian at July 27, 2016