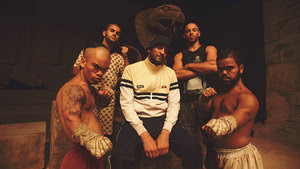 The title of the film is a Thai city with a thriving beach community. Its full of bars and babes. It is the perfect place for a knucklehead bodybuilder who lost his girl to try and forget her. The problem is the knucklehead has no money to get there. Fortunately for the knucklehead the city also is home to a monastery where dwarves are tried to fight MMA. They are looking for an opponent to challenge their champion. Our hero doesn't know anyone who can fight, but he and his friend know a small person and if they can convince him to go along with the plan they’ll be on easy street.

Incredibly funny and extremely unpolitically correct film is one of the real surprises at this year’s Fantasia. I was expecting a martial arts film with some laughs, I wasn’t expecting a full on assault on my funny bone. I laughed from start to finish, often a jokes that would have the PC police looking to ban the film. Frankly I would love to see this film get a US release but I don’t know if there is a company that would want to battle pinheads who would complain. The film makes fun of everything-every ethnic group, body type and belief gets zinged. It a kind of equal opportunity offender and we are so much better for it.

Watching the film I was struck by a sensation that on some level the film isn’t very good and I shouldn’t like it as much as I do, but then I realized how funny and clever it is and all was mad right. Laughter trumps quality.

I love this film a great deal. Its an absolute must see and I’m going to be trying to find a copy for my collection.

Go see this film- and be happy that the film isn’t in 3D since that final shot would make you ill.
Posted by Steve Kopian at July 25, 2016