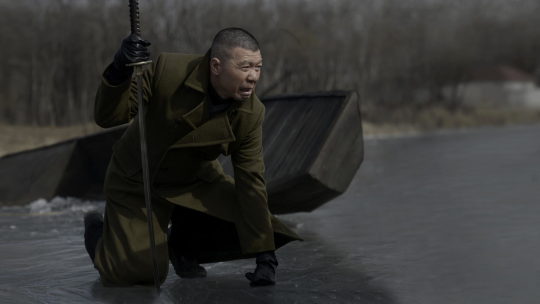 Released in the US last Christmas MR SIX failed to garner much notice pretty much anywhere in the US. I didn't realize it played until my friend Joe Bendel said he reviewed for it's US release six minths ago.  What a huge sin it is because Feng Xiaogang gives one of the greatest performances you'll ever see and it got no notice during the awards season. Its got my vote as being one of the greatest overlooked performances ever.

Mr Six is an ex-gangster now running a small shop. A man of honor and principle he values manners and the proper way things are done He does not get along with his son, who has moved out of his house.  When after 6 months he goes looking for him he realizes his son is in trouble. He is being held for ransom by the son of a powerful official because he scratched the young man's expensive car. As Six gets his son out of trouble things spiral out of control and t's time to get the old gang back together again.

A deeply affecting heart punch of a film, this maybe one of the most human films you'll see. Six is in many ways, the man we'd all like to be. Despite being beaten down by life, Six lives by his code and that is enough because it allows him to connect with the people around him.

Feng Xiaogang gives a performance that is beyond amazing. Six is in his every move, gesture and look. Watching him shuffle along you see his whole world in his eyes. You never stop believing he is Six from the instant you see him, to the final fade out- we know the man, his code and most importantly his soul. Its comparable to the performance Michael Caine gives in HARRY BROWN, where Caine's subtle performance speaks volumes about the character at the center of the film. That was another performance that should have won every acting award but didn't.

I don't know what to say but sitting here after the film my heart is in my hand, my jaw is on the floor and tears are running down my face. I can't tell you about how the film reflects Chinese society because the god damn movie has kicked my legs out from under me and made me feel like a building has been dropped on me. Emotion trumps reason and this film has it in spades. Best of all its the best kind of emotion, the sort that comes from real characters interacting and touching our hearts.

I love this movie.

If you haven't seen this film you absolutely must see it when it plays Thursday night, just be prepared to be limp in your chair when its done(and stay through the credits)