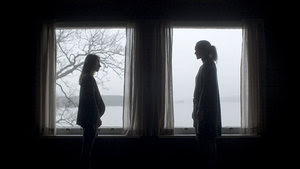 99 out of a hundred times if some one says they don't watch horror movies and then they decide to make one you are bound to fail. Director Ali Abbasi says he has seen four or five horror films in his life but he claims that the genre is not a valid one since it only exists as a marketing ploy.  Taking an attitude like that is going to make the film you turn out suspect especially since the film is designed to be very much the thing you hate.

Actually Abbasi has done a truly amazing thing and made a horror film that just sort of lays there and kind of bores the audience into submission, especially one that loves horror films.

The plot of the film has Elena, a Romanian woman in need of money, taking a job as a house keeper for a Danish couple living in the country. The well off couple do not have electricity, are vegan and live a "healthy" life style. The couple asks the housekeeper to act as a surrogate mother in exchange for all the money she would need to buy an apartment back home. She agrees but soon sense that something is wrong, that the fetus may not be human.

Abbassi's film is a really strange one. Its a film that seems to be operating it's it's own universe where logic and reason don't exist. Nothing in it really makes a hell of a lot of sense, from the opening moments when Elena arrives to find that there is no electricity or running water and that the life there is one where they live off the land (wouldn't they have told her before she arrived?) to the final 25 WTF minutes which give new meaning to WHAT THE F#&% (the graphic fisting bit). I kept watching the film not because I was enthralled by the plot(the pacing is deadly slow and the plot has been used way too many times to be of interest) rather I kept waiting for the odd bits to pop up, what new out of the next parallel universe twist was going to happen.

What a freaking train wreck.

No that's not fair, a train wreck would imply something like THE ROOM, this is more along the line of a really bad slow motion car accident that you watch happen in disbelief.  I mean you have a great cast,  beautiful photography, but you also have this script which crashes into them and forces them into a ditch. I'm sure this makes sense in the director's head, but since he's the only one in there it's left to the rest of us to try and figure out what he was getting at because none of it is on the screen.

I suspect that for the film to work you have to give yourself over to it and it's weird shifting logic. You have to believe that the characters would do a number of things that don't really make sense at least for the first hour which replays almost every surrogate mother tale you've ever seen (Paging Rosemary). It might have worked had it not been rather cliche (which considering I've seen hundreds of horror films is a no duh) and leadenly paced. The film in trying to give us a sense of place and space slows it all down and we have time to think about the other films that we've seen and the director clearly hasn't.

And then once the baby is born, sorry if that's a spoiler, the last 25 minutes just go weird. I have no idea what the hell happened. I don't know nor do I much care. Things happen and then the film ends I was left scratching my head wondering what the hell was that.

I suspect that this film will get a reputation for it's weirdness and occasional graphic nature, but I can't seriously believe that anyone would actually think this film is high art...unless you've not seen many horror films or think they are a marketing tool.

The funny thing is that I think director Abbassi is using the film as a marketing tool. He's made a horror film not because he cares for the genre or the characters, or the story or, even for film, rather he can do things that will get him noticed so he can make another film. Clearly it's worked because it's gotten him a second film. Whether that film will be good or not has yet to be determined, however  since its clear that Abbassi is so willing to sell out in his one certain shot I will be highly suspicious of any film he makes from here on out since he has motives other than telling a good story or telling a story with any sort of meaning.