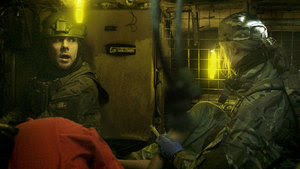 Using the fact that director Ben Wheatley is a co-producer as a selling  point TANK 432 mines the same existential horror as films like Wheatley's A FIELD IN ENGLAND as well as any number of other similar horror films where a group of guys on a mission seem to be stalked by some supernatural force. We've been here before.

Here a group of soldiers transporting  two hooded and red jump-suited prisoners run into trouble. Something or someone is closing on them Reaching a farm they find complications as a jeep they hoped to use to escape is not functional, there are dead bodies and  a girl locked in a container. The group decide to leave the wounded and fleeing into the country. Finding an armored personnel carrier they crawl inside but not before one of the cargo is dead and some of the men are seeing a bioharzard clad figure stalking  them.

Good but nothing special, TANK 432 has some tension but ultimately kind of runs into the same troubles that other films in this subgenre do.  First the stories often require that the characters make choices that don't really make sense- why exactly are they getting into an armored vehicle that appears that it can't move? Secondly for the film to work the film has to keep everyone in the dark until the last possible moment when the revelation suddenly comes- which more often than not isn't as clever as the filmmakers think. Here the revelation is compromised by the promotional material mentioning secret documents which is a kind of dead give away.

A good distraction if you take it on it's own terms, TANK 432 is destined to end up on the pile of  similar military horror films that don't quite work and once seen are never ever seen or mentioned again.