Japan Cuts Capsules-BEING GOOD. KAKO MY SULLEN PAST and KEN AND KAZU 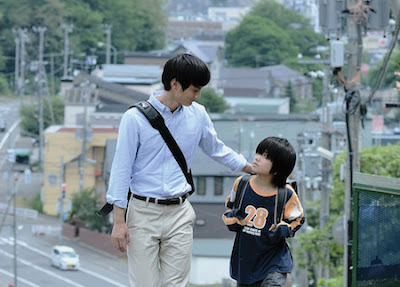 BEING GOOD
Pained slice of life from Mipo O who gave us the bleak but amazingly wonderful THE LIGHT ONLY SHINES THERE which played Japan Cuts last year. The intertwined stories of an elderly lady misidentified as a shop lifter, a teacher trying to to decide what to do with abuse and a mother trying to cope as a single parent.

A very heavy very serious drama that sucks you in and drags you along BEING GOOD is one of those films that is not for anyone wanting a light and fluffy film. This is full course of extremely well done and well acted strum and drang. If you are looking for a heavy meal this is very recommended. 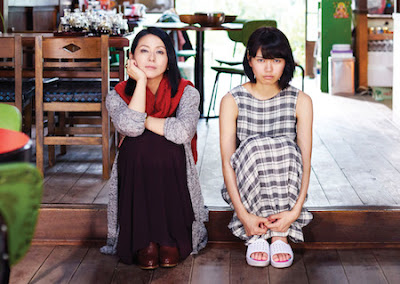 KAKO MY SULLEN PAST
High schooler drifts through life not caring about anyone or anything has her life up ended by the aunt she thought was long dead, killed in an explosion years before. The returning aunt wrecks her thoughts and her complacency.

Unremarkable comedy drama isn't bad but isn't anything to write home about. This is a middle of the road film that has moments but is largely forgettable and the sort of film you'll wonder why it was being programmed. 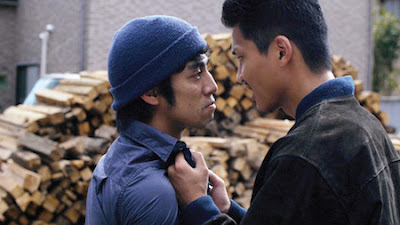 KEN AND KAZU
Feature version of a short film is a low budget crime film that looks no different than any number of American films- only all in close up.

The plot has two drug dealing friends having their friendship and partnership tested to the breaking point when one of them want to go straight with his pregnant girl friend.

Well acted tale might have amounted to something more than run of the mill and merely adequate if only director Hiroshi Shoji had decided to use something other than a close up. Told almost entirely in faces the film has no real sense of place because for most of the film we are tight on someone face or looking at a location in such away that a body or some part of it fills the frame. I felt claustrophobic and after a while I simply didn't want to bother watching any more because I got no sense of anything beyond  the stern faces.

I have no doubt that Shoji is a fan for Dreyer's JOAN OF ARC with its constant close ups, but even so Dreyer knew when to go wide.

For those who think inde films can do no wrong only.
Posted by Steve Kopian at July 22, 2016