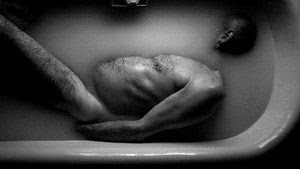 Why would I kill you, you are my only friend

In the 1960’s a clean cut but odd looking young man shows up at the home of a family in the country. Asking the mother where the bathroom is things escalate rapidly as the man produces a gun. When the father returns home and find the young man chopping up his wife in the bathtub all hell breaks loose. What follows, the ramifications of the act on young Francisca, is chilling

Actually for the first 20 or 25 minutes this eerie black and white film is aiming to be something truly unique. Described as a dark tone poem by the Fantasia promotional material the film really is just that. It’s a quietly disturbing film that sucks you in with long takes and a twisted turns that chills you with its whole atmosphere of the world off the rails.

The trouble is that what is one of a kind for about 20 minutes has the uniqueness go away as the film jumps ahead in time and we get a film that follows the horror trope of a sweet looking young who doesn’t want to be alone and is completely nuts. While the film gives us moments in the last hour that chill, a potential lesbian encounter that goes wrong, a moonlight hug in field, things never match the opening quarter of the film. I suspect that it’s the result of having the real world intrude on the lyric beauty. Once Francisca goes away from home the spell is broken, yes, what happens is scary, especially since we often only see the lead up and the aftermath , but it’s real world. The poetry is gone as people speak in real world sentences about real world things. What was an outstanding film becomes a good one.

Disappointment at not having a film that hits it out of the park aside, I like this film a great deal and it’s insistence on trying to be different and stand apart from the rest.
Posted by Steve Kopian at July 18, 2016