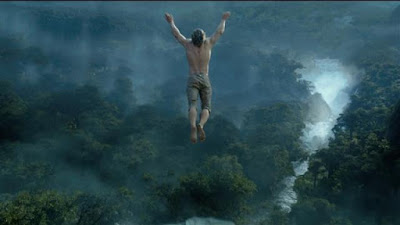 I was hooked early into the Legend of Tarzan. It was a small detail that hooked me and pulled me in. It was something I noticed on my own before it was commented on-that being Alexander Skarsgård ‘s hands. How he holds his hands are similar to those of a gorilla’s. If he walked on all fours his hands would be held in a certain way and they are. It’s a detail that no Tarzan film I’ve ever seen had and it impressed the hell out of me.

Set several years after Tarzan and Jane have returned to England, the film tells the story of what happens when Tarzan is invited back to see how wonderfully the Belgians are running the Congo. It’s a trap, since an enemy wants Tarzan given over to him for access to the diamonds his tribe controls. Tarzan doesn’t want to go, but George Washington Williams (a real person played by Samuel L Jackson) wants him to go to help stop the slave labor rampant in the country. Joined by Jane who is home sick for Africa, the trio returns home and into danger.

An old school action film with great characters and stunning action set pieces this is the sort of film that they really don’t make any more. Its pure adventure that harkens back to the Edgar Rice Burroughs originals at their best. It’s one of my favorite films of the year because not only is the film a great deal of fun it’s how I have the characters in my head.

The truth of the matter the film is kind of a spiritual sequel to the first two Johnny Weissmuller films. Both Tarzan the Ape Man and Tarzan and his Mate are films for adults with sensuality and danger that was lost with the return of the production code. The third film Tarzan Escapes which was chopped up during production shows signs of that as well. Tarzan loves Jane and don’t anyone dare get between them because Tarzan will get her back no matter the cost. As Jane says "A normal man can do the impossible for the woman he loves. My husband is not a normal man.: What I find strange is that some people don’t like the “modern” Jane but if you’ve seen the early MGM ones, and many of the RKO ones she is a woman of action. The “rethink” isn’t that at all.

Actually many critics have slammed Legend as being a rewrite of history, of the character and other things that they decided the film is or is not. Many seemed to find that the character is just a bad idea because it’s a white guy saving the natives. Perhaps on some small level that maybe the case, except that’s the character. He is a white guy who lives in the jungle- but he’s one that respects everyone and everything in Africa a hell of a lot more than the white world. He is not a leader of men because he’s white, he’s a leader because he kicks ass. He is followed because his actions have earned the respect. He is not the white savior.

Ultimately this is not the place to do a full on defense of the character or the film against what people perceive the character is and what the history is, that may come at a later time. For now it simply should be pointed out that I’m pretty sure most if not all of the critics writing on the character and the film's "flaws" seem to have no clue about what the the films or the books really are. They have the perception of what they are from pop culture references and not the stories themselves- trust me I know I went through all the film earlier this year and found them different than I thought. I also had one writer who bitched about the film and the use of the character tell me flat out they never saw an Tarzan film before

I highly recommend the film. It’s just a blast and a half. I like that the film exceeded expectations at the box office and that audience reaction is extremely positive- more so than the critical one. I’m hoping that the film does well enough that we do get a sequel because there are more stories to tell. (and if there are sequels bring back Samuel L Jackson)

One of my favorite films of 2016 and one of the best Tarzan films ever made
Posted by Steve Kopian at July 06, 2016