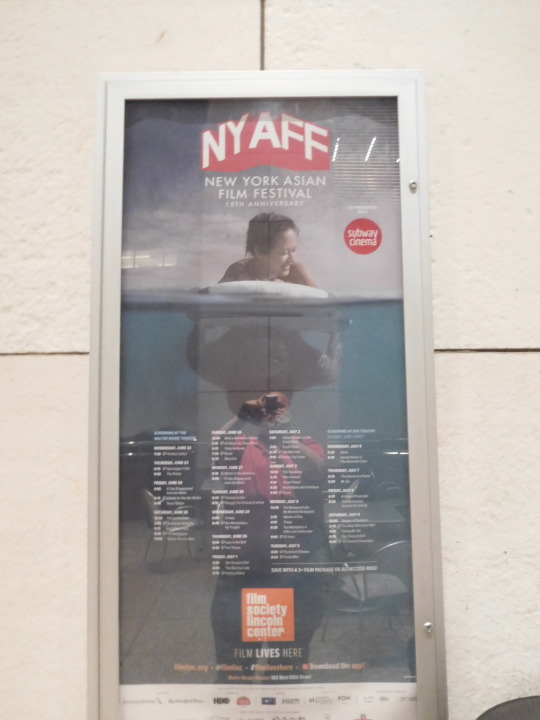 I was at the Walter Reade Theater for four of the festival's five films. I already had screened and reviewed GRACE on Friday so I skipped that. There were no awards or Q&As during my watch although Rufus did have to calm someone down who again didn't win the raffle by saying that he wished he could channel his inner Oprah there were new cars under our seats. It was a good joke expertly timed and started the day off with a good laugh.

I wish the first film had been as good as his joke instead of the DOA turkey it turned out to be. The first film of the day was THE TAG-ALONG which was created based on an internet video that supposedly shows an evil ghost following people in the woods. Here the ghosts have moved to the city and are going after people because their trees have been cut down.

Well made, THE TAG-ALONG is one of the least scary and stupidest horror films of the last ten years. It's boring as all hell. Allowing that the effects are just okay CGI there are a couple of creepy images, but anything  good is sucked away by a script that makes no sense what so ever. The ghosts are suppose to drive people mad by preying on their sense of guilt- except that we never know what anyone other than the couple at the center feel guilty about. Events happen randomly, time is marked as being important but then ignored and every couple of minutes there are loud noises which are supposed to make us jump. There is a sense that no one would believe in the ghosts, except there is clear video evidence. Nothing makes sense as the rules change as needed.

Even by the wacky often extremely loose Asian horror rules which allow WTF moments this film is a mess which is saying a great deal. Its so bad that I took four pages of notes detailing it only to throw up my hands toward the end and stopped writing. As for the double gotcha ending-are you freaking kidding me?

And worse for a horror film- no one jumped, no one was scared and no one cared.

If this had a script that worked it might have been something. One of the dumbest films ever run at NYAFF. (And if I had seen it on a screener I would have shut it off 20 minutes in and never reviewed it) The second film of the day was MISS HOKUSAI Studio I.G

Based on Hinako Sugiura’s manga series Sarusaberi the film is the story of Katsushika Hokusai’s daughter O-ei who was her father's equal in some kinds of painting. You know Hokusai because of his painting The Wave) and you've probably seen some of her work because she helped him out at times.

The film is an episodic tale which gives as glimpses into the life and times of a young woman who simply wanted to create and was her own person just as much as her father was.  While the film is very good and I enjoyed it while it as on, I think it would have been better as a TV series where there could have been an arc to the characters instead of just flashes of moments.

A must see for anyone interested in anime or art. ZINNIA FLOWER should have played at the New York Film Festival or some other snobby festival. This isn't to say the film is bad, only that it's not the sort of thing that NYAFF audience are going to latch on to.

Based on the director's own experiences, the film follows the 100 days of mourning for a man and a woman who lose their spouses in car accidents. We watch as they separately deal with friends and family as well as the unfathomable feeling of devastation and loss. The 100 days are part of the Buddhist ideas of what happens to the soul in the afterlife.(The title is a flower that blooms for 100 days)

Getting it dead nuts right in expressing what one feels when experiencing a great loss, the film also gets it wrong in what an audience will sit through. Again there is nothing wrong with the film except that not a hell of a lot happens other than deep silences as the two people, who only occasionally meet, deal with their grief. Other than an occasional outburst or overt act nothing is ever said.

I kept waiting for something to happen, that never did. Its not even a mediation on grief, its just a documentation that just sort of is. HEART ATTACK aka FREELANCE was billed as romantic comedy by the Subway Cinema guys. Comedy? Yes certainly. Romantic? Only by the narrowest of margins and that's being overly generous.

The film follows a freelance graphic artist, Yoon, who almost never sleeps because time is money and if he doesn't say yes no one will bring him work. His job and the habits it creates cause him to get a skin condition and getting it treated brings him into contact with a beautiful doctor. Sparks fly- but only on their monthly visits which punctuate the film.

Long (its over two hours) comedy is kind of a running look at Yoon's life from his POV since he provides us with a very funny running commentary. Full of likable characters and some unexpected twists (if only because if this was a Hollywood production it would go in another direction) the film entertains more than most recent comedies.

I really liked it, as did most of the audience, all of which leapt out of their seats when an unexpected event startled them more than any horror film at the festival. Let's hope this is the rare non-action themed Thai film to get picked up for a US release.

And with that I headed off  for a late train in order to write this up and to get more than four hours of sleep.

Plus check the Unseen Twitter feed which has pictures and quick comments on the NYAFF films before I write them up.
Posted by Steve Kopian at July 04, 2016