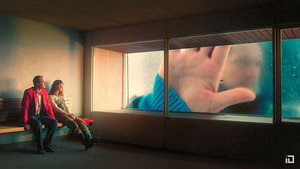 After his father dies Aloys, a private investigator who refuses to connect to the world - he literally stands away from people and only really experiences life through hat he records on his camera-continues ith life as if nothing has happened. When his camera, his sole connection to the world, is stolen he freaks out, however a call from a strange young woman sets him on a quest that sets him on the path to reconnect with the world.

Melancholy, moody and ultimately moving ALOYS is the sort of thing that only movies can do- take us places and show us things that no other medium can. This is a wonderful trip inside the mind of it's main character and thereby a trip inside of ourselves. Its a film that takes us in unexpected directions, upends our thought processes and forces us to connect with it in ways that few films bother to.

I have really don't know what to say, not so much that I don't have anything to say, rather because the film is one that is best experienced blind. I went in with only a vague idea what the film was and then just let it wash over me. As a result I was completely open to the film and it's world.

This is just a super little film and very recommended.

The film play tomorrow at Fantasia and is a must see for anyone who ants a good film that's not your typical choice.. For tickets and more information go here.
Posted by Steve Kopian at July 26, 2016