The Final day at NYAFF 2016- KEEPER OF DARKNESS, BOYS WHO CRIED WOLF, TOO YOUNG TO DIE and TENANTS DOWNSTAIRS 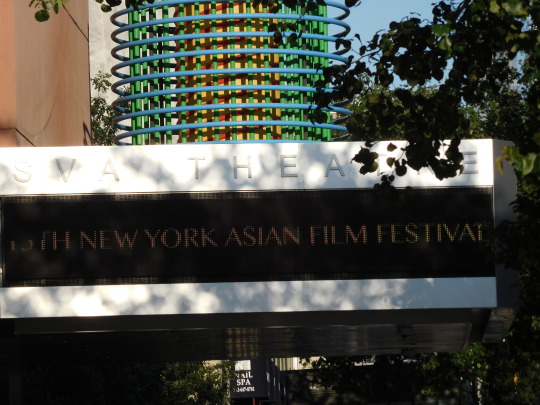 The New York Asian Film Festival is done for 2016. I suspect the NYAFF crew is unconscious and will be until Tuesday. It was a great year. I'll take stock later but for now a report on the final four films I saw.

KEEPER OF THE DARKNESS is a really good Hong Kong horror thriller about an exorcist, Fatt, who is connected with the triads. He's helping them get good karma for each good deed wipes out three bad ones.  He is working to free the spirit of the woman who had lived in the apartment he grew up in since he was a child. He is also in love with her. Fatt gets drawn into drawn into the case of father and daughter spirits who are looking or revenge. Great characters in a beautifully drawn world make this a really fun film. Think a Hong Kong Dresden Files and you'll have an idea of what this is like. I hope it spawns sequels because I loved this film.

BOYS WHO CRIED WOLF was a student thesis that took off. Directors Kim Jin-hwang said he didn't expect the film to take him around the world and finds it all surreal.

I know all the Subway Cinema programmers were high on the film but while it looks fantastic and is perfectly acted the script doesn't know how to blend the character study with the thriller with the result the film swings in odd directions, which would be fine in a pure character study, but at the same time is alternately too complex and too simplistic in the murder story which doesn't work as a thriller. I know people absolutely loved it, I would have walked earlier if I had known it was that simple a story.

After its first screening TOO YOUNG TO DIE was the leading choice for audience award and the second screening as packed with people who had seen it before- including the Subway Cinema guys who were blowing off their own party to see it. The film was held out as THE GREAT FILM OF NYAFF 2016. Having seen it I can say - No.

I think not. Its goofy fun to be sure but its way too long at 125 minutes  and after a while the live die reincarnate repeat  get tiring.

I suspect that if I had seen it blind I too would have loved it but it was wildly over sold by everyone.
I will be shocked if TENANTS DOWNSTAIRS gets a US theatrical release- or an uncut release on home video. This button pushing film breaks taboos everywhere with almost every type of sex, violent act and transgressive act imaginable. Its funny and frightening but it will push your buttons and it had the audience talking to itself. (They screened a version that is 16 minutes shorter than the Taiwanese one and I'm real curious what the differences are)

The plot has Simon Yam explaining to the police what happened to the tenants in his building because- they all seem to be dead.

I would love to say more but finding out what happens is the fun of the film and I don't want to spoil it. Very much NOT for all tastes, the sex and implications of some things is going to ruffle feathers. I really liked it but had my buttons pushed. There is also a fine line between telling a story and reveling in the nastiness that the film dances around and may have crossed. I need to do a full review after more thought.Run to see this  if it plays near you because I'm not sure how distributors will react to it.

And with that it's time to take a break. regroup and eventually circle back for a warp up and some longer reviews. I had a blast but as the picture below suggests my eyes are not working so well any more.