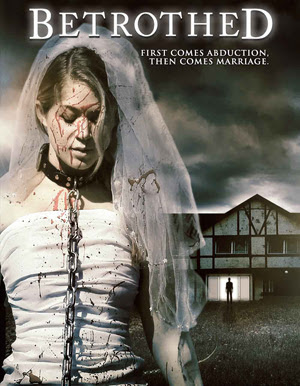 Coming from Osiris Entertainment BETROTHED is the story of a young woman kidnapped and taken to a remote house in the middle of a desert. She is to be the bride of a the locked up son of the family. Knowing there is no way she can remain there she plots her escape- uncertain how she is going to be able to travel the hundreds of miles home.

Better than most micro-budgeted horror films being churned out in this age of digital age BETROTHED is actually something you’ll want to watch to the end. While not breaking any new ground the film scores in several ways that most similar films fail to, namely it’s competently made and the cast actually try to sell that they are in the situations in the film. No one is treating it as a goof with the result we are drawn into the film. I can’t tell you how many horror films get tossed out my window because everyone connected with the film treats it as a lark or worse confuses horror with comedy.

While not the greatest horror film ever made it is entertaining and worth trying if you are looking for something off the beaten track
Posted by Steve Kopian at July 14, 2016