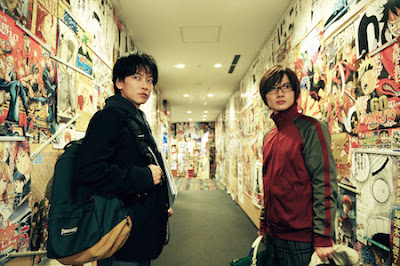 Hands down one of the top three films at Japan Cuts and one of my favorite films of the year this is a must see film for anyone who love films about creation and comics of all sorts. (I'll wait to see more of Fantasia but it's already high on my list of favorites)

Based on a best selling manga the film follows two high schoolers Saiko and Shujin as they create their own comic and then attempt to crash the offices of Shonen Jump in the hopes of getting into their weekly magazine. Of course there ends up being competition....and a cute girl who wants to be a voice over actress.

Charming, wonderful and as good a cinematic adaption of any sort as you're likely to see this is just a fantastic film. Its characters you relate to doing what they love in a way that moves you. I love that the film sucks you in and brings you into the creative process. As a writer of uneven success I related to the drive to create and what it takes.

I can't say enough good about the film- other than I need, and I mean need, to see this film again because it touches my soul in away that makes me want to go out and create something wonderful.

If you love great films or if you simply want to create see BAKUMAN when it plays at either Japan Cuts this weekend or Fantasia on July 30th.

For details on the Fantasia screening go here
Posted by Steve Kopian at July 12, 2016