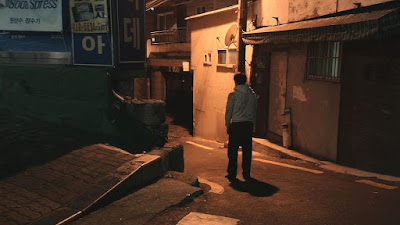 Dream like story of a photographer, who after being beaten up by masked thugs who saw him taking pictures of them killing a woman wakes up in the neighborhood he had been photographing, over and over again.

The film is a weird kind of internal loop we experience with our hero. How much of it is real, how much is a memory and how much is dream is open to interpretation. Its done in a bold cinematic style that keeps the viewer disoriented and forces one to try and piece it all together from the clues and conversations we have along the way.

How you feel about the film will depend upon whether you buy the films looping nature and dream logic of if you don't. If you buy the weirdness from the get go you are going to be golden and you'll love the film. This is going to be many people's favorite film at NYAFF, or perhaps ever with it's no easy answers and decided feeling of being off scoring points over similar weird American films.

If on the other hand you're like me and you don't click into the weirdness from the first frame this is going to be a tough go. Yes the film is jarring and a technical tour de force, but there wasn't enough for me to allow myself to be carried away. By the time enough tidbits had fallen in place that I could go with the flow I really didn't care much.

This is a film that I intellectually admire more than I'd like.

Reservations aside, if you like off kilter mind bending films give this a shot.

For tickets and more information go here.
Posted by Steve Kopian at July 03, 2016