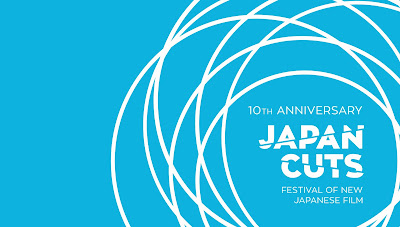 As you’ve no doubt noticed the Japan Society’s Japan Cuts is opening this week. Running Thursday through the 24th the festival is New York’s annual survey of all types of Japanese cinema.

Continuing the move away from the wild and craziness that was part of the years when the festival was so presented by Subway Cinema the film is full of a good many serious and artistic films. If you’re looking for the craziness of wild Yakuzas, and giant monsters your only real choice is Sion Sono’s LOVE AND PEACE which is one of the best films you’ll see all year. It doesn’t have Yakuzas but it has a growing turtle and is perfect for the whole family.

I am about to get into trouble with the Japan Society-

To be honest I don’t know what to say about this year’s festival. I’ve seen over half the features and I’m trying to come up with something great to say. Normally I do these curtain raisers weeks in advance and I’m thrilled because I know the goodies you’re going to see. This year I’m really split. While the festival has some really great, as in best of 2016, films are largely of a type and very arty. In a bunch of the reviews I warn that the films would almost be better at something like the New York Film Festival as opposed to Japan Cuts where you’re going to be getting a different audience who want a broader selection of films-it would have been nice to have genre films. The festival is not so much a survey of all Japanese cinema, rather it’s a survey of one facet- drama with a couple of comedies and documentaries thrown in. Even Sion Sono’s WHISPERING STAR, one of his most impressive films is a high art film comparable to the meditative works of Andre Tarkovsky and not the man who did TAG, COLD FISH or BAD MOVIE. This is not a survey of all cinema, rather it seems to be one person’s idea of it. (And with that I’ve just been disinvited to everything the Japan Society ever does from here on out)

I am not telling you this to imply this is a bad festival, just to warn you that this is not the festival of the last seven or eight years- this is look at “serious” Japanese film, even the comedies which are more dry and deadpan. Imagine walking into your favorite diner to find it’s suddenly and unexpectedly gone upscale

Again the films are really good and worth seeing- just don’t expect anything populist.

My favorites so far:

The festival starts Thursday and runs through the 24th. For tickets and more information go here
Posted by Steve Kopian at July 10, 2016