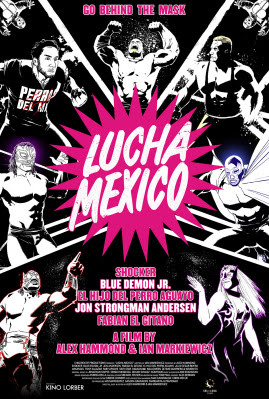 LUCHA MEXICO hits theaters and VOD on Friday. Its a super look at Lucha Libre, Mexican style wrestling.  Its a must see.

When the film played DOCNYC both Mondocurry and myself reviewed the film while Mondo interviewed the directors. (The inteview can be found here) 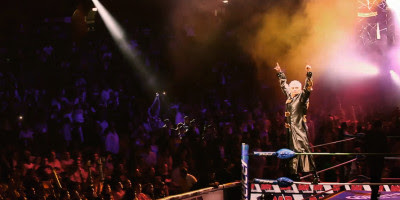 Here is two takes on LUCHA MEXICO- mine and Mondocurry's.

I’ve seen many documentaries on professional over the years with a small number of them being on the glorious Mexican twist on it known as Lucha Libre where wrestling is something more than a spectator sport but a way of life. Its such a big deal that some of the stars becoming screen and stage stars. All of the previous films I’ve run across gave one a taste of the craziness but I don’t think that any has made one really feel what it’s like to be a luchador as well as LUCHA MEXICO which is playing at DOC NYC.

The film follows several wrestlers who are based at the Arena Mexico in Mexico City which is the center of the Luchador universe. We watch as they train, wrestle, inter-act with fans, teach classes and everything else they do during their days. To its credit the film doesn’t shy away from the dark side. We see people get injured and we watch the fall out when one of the group is killed in a freak accident. A kick goes wrong and breaks one of the wrestler’s vertebrae. The shock wave leaves everyone pondering about their own future and brings home just how dangerous the sport can be. Interestingly the death also hammers home how safe the sport can be since as one wrestler says if they were really to fight no match would be longer than 5 minutes.

And because he is an expert on wrestling here is Mondocurry's take on the film ran as part of a a piece on Lucha Libre events in the NYC area earlier this week.that appeared on his new Mondocurry.com

LUCHA MEXICO is a documentary featured at this year’s DOC NYC festival of documentary movies. It will be screened on at 9:45 Friday, November 13 at the IFC Theater in the West Village with director and writer Alex Hammond and Ian Markiewicz, as well as subjects and real luchadors Shocker and Jon Strongman in attendance. An additional screening will take place 4:45 on Wednesday, November 18 at Bow Tie Cinemas in Chelsea, where only Hammond and Markiewicz are scheduled to appear.

It is an ambitious film covering a lot of aspects of lucha, including its history, the perils and prestige of those in the sport, and behind the scenes aspects of the business. One meets a colorful cast of characters ranging across generations, though there is a strong focus on Shocker and Strongman. While not entirely focused (it is not quite a history of the sport and not quite a biopic on Shocker though at times feels like it could be either of those things) it is a pleasure to take in the beautifully captured visuals that look better than much of those tv broadcasts I snuck in ages ago. Fans, especially those new to lucha stand to learn a lot. The colorful cast of characters also speak volumes for themselves. One gets a sense of how vividly different the scene in Mexico is from the mainstream wrestling products in the US, with strong female wrestlers like Fabe Apache and Sexy Star, and Mini-Estrellas like the KeMonito all getting a bit of representation.

The movie also gives a strong sense of how deeply rooted lucha libre is to the Mexican cultural identity, with the top stars presented here seeming just as at home doing shows in large arenas and open air exhibitions in more remote villages. The vibrant colors that lighten the more dilapidated locales are breathtaking. The doc also boasts a smart, snazzy soundtrack embodying the melding of tradition and style, which is especially effective over some montages toward the feature’s end. One must stick around for a very smooth and smart title sequence animation over the end credits.

A lot of the footage may feel dated for those keeping up with Mexico’s largest brands and talent featured in them. However, an updating of events definitely occurred, as the movie focuses a bit on the recent tragic passing of Perro Aguayo Jr. during a match. This is spiced into the film seamlessly, and while sad, presents Aguayo and his risk taking peers as heroes.