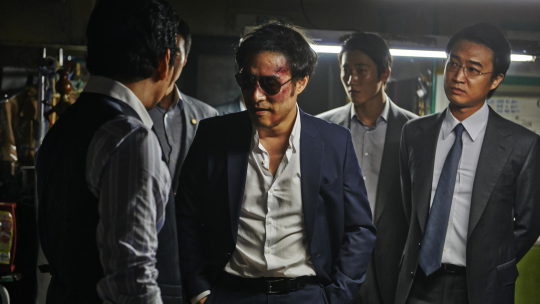 Lee Byung-hun kicks ass and takes names as a gangster who wants revenge in the Korean political thriller INSIDE MEN.

The plot of the film  has Lee Byung-hun as a the right hand man to the big money men in Korean business and politics. When a deal is struck where by a newspaper backs an up and coming senator for president Byung-hun tries to make a play is betrayed and his right hand is cut off. Vowing to get even he begins to help a crusading prosecutor in order to bring don the men who feel they can't be touched.

Many people feel that the corruption in Korean society is wildly out of hand. The unholy marriage of big business and politics is, in the minds of many, strangling the country. However until recently there really hasn't been any direct attacks on the corruption for fear of reprisals. However recently in popular media such as film and comics (this film is based on a web comic), people have been attacking the corruption. While few have been bold enough to name names, people are finally getting their heads out of the sand and saying that they don't like what they see. INSIDE MEN was a box office hit in Korea because people are tired of the bullshit.

Writing about this film is a bit tough. I can tell you about how great the cast is or how beautifully some of the sequences are put together but I find that unless I keep the discussion of the plot simple I'm either going to reveal too much or make things seem overly complicated. I assure its not and once things are set in motion the film moves like the wind to the end.

Definitely one to see, or in my case see a second time because I really want to see how the early stuff plays now that I know the end stuff.

For tickets and more information go here.
Posted by Steve Kopian at July 02, 2016