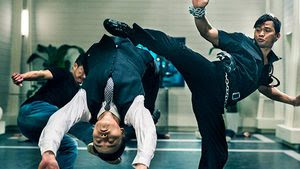 In name only to 2005's KILL ZONE has Tony Jaa as man who takes a job as prison guard in order to make money to pay for his sick daughters care. Meanwhile in Hong Kong a human organ trafficking ring is giving the police fits. When an undercover cop from Hong Kong who was on the trail of the traffickers ends up in his prison Jaa realizes the cop maybe an organ match for his daughter so he has to keep him alive.

To be honest the plot means nothing- what you want to see is the action. Sequence after sequence of action from the intake of the cop into prison to the shoot out in the terminal  to the centerpiece prison riot to the final confrontations its all about the breaking of bones.  Outside of the WTF ending what you are going to remember about this film is the seemingly endless parade of flying fists and lethal kicks.

As a name only sequel sequel the film actually is keeping in line with the first film. The original film launched star Donnie Yen into super stardom because he shone brightly in the endless and bone crushing fight scenes, which twere the only thing I remember about the first film. The first film was one you talked about and recommended because of the fights and that is the deal here. The plot is secondary, if not ludicrously unnecessary.

I like this film a great deal, It was a shot of adrenaline into my system

Its single Fantasia screening is tomorrow afternoon and it is a must see on a big screen. Trust me you want to see this big where you can get lost in the mayhem on screen.