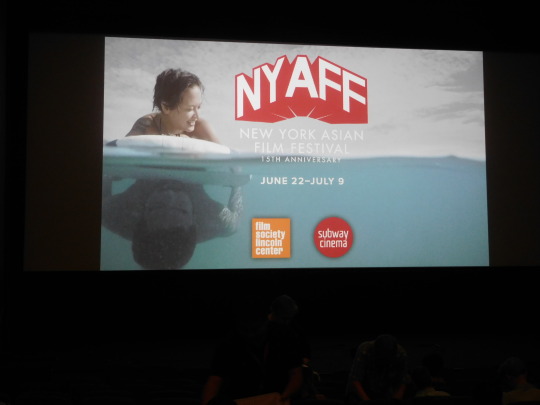 Four films on July Fourth at the New York Asian FIlm Festival. I did want to see the fifth 10 YEARS but the lateness of the hour (it ends around 11 PM and then had a Q&A) made it a no go. Besides 13 films in 3 days was a bit much.

I do have to say that ith each day that passes I see more friends and at this point other than Mondo and Chocko I've seen everyone who is part of the usual NYAFF crew over the weekend including Hubert, Pat, Stan, Jared, Lee, Earl and Shaun. Now if I could just see Mondo all will be okay with the festival. Sammo Hung's THE BODYGUARD is a spiritual remake of Clint Eastwood's GRAN TORINO but with broken crushing violence and tears.

Sammo plays an ex- Chinese special operative who moved back home after retiring. Crushed after losing his granddaughter (she disappeared while he was watching her) he lives alone and is suffering the effects of dementia.  When one of his neighbors gets in trouble with both the Chinese and Russian mobs, Sammo has to protect the man's daughter if for no other reason than atone for the loss of his granddaughter.

Bone crushing and bloody violence (has Sammo ever been this nasty?) mixes with heart rending emotion. What should be over the top silliness breaks your heart six ways to Sunday. Sammo's ability to construct sequences- one involving Bill Withers Ain't No Sunshine is as fine a music driven sequences as I've ever seen.

The action is some of the best Sammo has put on film, due in large part to it being so different than what we expect from the master. the audience audibly reacted with each stab, broken bone or severed limb. This is not for kids.

The film is a beautiful mix of emotion and styles as Sammo does more than the usual action film as he raises political issues and makes fart jokes which truly work within context.

But there were more movies .... WEEDS ON FIRE is the story of the first youth baseball team in Hong Kong back in 1984 and how it changed youth sports...and won a championship its first year out.

Or its a coming of age film about two friends in the projects.

Or its a mess of a film that is full of cliches and missing details but has one or two sequences that move you to tears despite the film not being very good.

Told from the stand point of two team members the film kind of jumps through time. Characters come and go, ideas are half formed and we have no idea how the team improved. Its so bad you just kind of go with it. Its pure cliche most of the time with the friend who falls away, a knocked up girl friend and the team coming together in a sequence of pure schmaltz that made me misty.

The weakest baseball film in NYAFF history and not worth seeing. 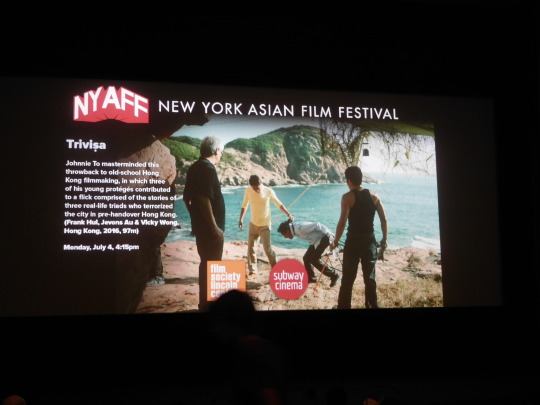 The third film was the three part TRIVISA which told a fictional story of three of Hong Kong's biggest criminals as they try to meet up.

Set in 1997 the film follows as one crazed robber switches to smuggling because he sees there's more money in it, unaware of the bullshit involved. Meanwhile another stays with an old friend so he can case the gold store across the street. The third,  notorious kidnapper tries to get all of them together for a super plan he is working on.

Directed by three up and coming directors and overseen by Johnny To, the film is more character driven drama than bang bang shoot em up. That is not a bad thing because the film is something completely unexpected- a gripping drama about bad people. 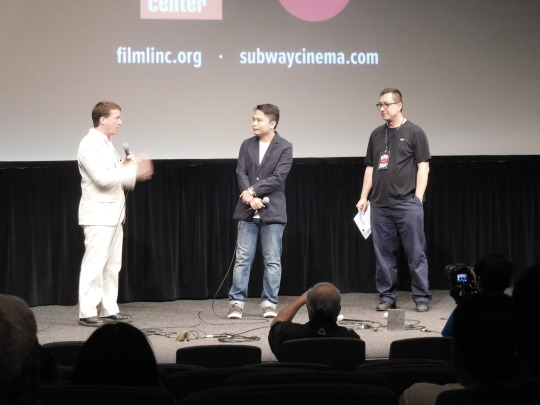 There was a surprise Q&A with one of the director's Jevons Au who happened to be in the area. (he also did the 10 YEARS Q&A later in the day). Jevons said that the film took three years to put together as they worked on the script. To did not want a typical crime film with shoot outs and such so they kept changing things around. Since the film was not going to be a recounting of their lives the events were shifted to 1997 and the relationship altered so that the men who knew each other had never met. He also said the film came from a rumor of a grand meeting of the three men who were said to be plotting a big job. It never happened.

The Q&A was fast, brief and informative (Mr C filmed it so it may show up on line). It was an excellent treat The final film for me was MOBFATHERS.

However before it they played the short KILLER AND UNDERCOVER. Put this excellent short from Lau Ho-Leung in the top five films of NYAFF. The film involves a cop who was stabbed with an umbrella and is dying climbing into the back of a taxi which is off duty and what results. As perfectly constructed a film as I've seen all year and one of the funniest as the loopy situation just goes six degrees of WTF.

MOBFATHERS is Herman Yau's film which will never play Mainland China. A Hong Kong F-YOU! to the ruling crazies in Beijing its full of sex and violence and political over tones that will endear it to no one with power.

Part comedy, part satire, all bloody old school gangster film this film is like a knife wound in the gut. It has a young gang leader getting out of prison after a number of years. As he tries to put his family back together he gets caught up in the political fight for the leadership of the Triads The Dragon Head. As the young guns dance the old guys manipulate the board with the result the bodies pile up and by the time the film ends everyone is dead- or near enough that you can't expect a sequel.

A damn good film on it's own terms it's damning indictment of Chinese power and how the old men manipulate the young to maintain the status quo. It could also be seen as a warning about power everywhere since the candidates running in the current US Presidential election are not the breathes of fresh air promised with both Clinton and Trump having enough ties to the behind the scenes poer brokers and money men that no matter who wins there won't be any sweeping changes- not the ay that either side hopes.

MOBFATHERS is a deeply disturbing film on any number of levels and a must see.

And with that I went home to try and get to bed early (that didn't happen it's after 1:30 am as I finish this) and take meds for the cold I've developed.

Keep reading for more reviews and festival reports over the next couple of days
Posted by Steve Kopian at July 05, 2016