I was curious why the Japan Society was essentially burying the collection of experimental anime shorts at 930 on a Sunday night and then I saw them and I kind of understand why, some of them are the sort of thing that will confuse the regular audiences for the festival and send them out into the street with an early exit. Some of these films are not for general audience

Not to beat around the bush this collection of films is a mixed. Bouncing from visually amazing (LAND, AGE OF OBSCURE) to just strange (OUCH CHOU CHOU and MASTER BLASTER) the collection had me swinging from wide eyed delight to “how much longer is this going to go on” (MASTERBLASTER- I mean do we really need to see women flying out of people’s butts?)

For the most part the collection is pretty good, with the visually wild ones (LAND and AGE OF OBSCURE) being the ones that are going to get your blood pumping and being the reason that if you don’t mind being up late on a Sunday night go.

The biggest problem with the collection is that there is a sameness to the films. The visual motifs repeat in film after film. It’s as if someone with a certain eye picked all of the films and then threw in some button pushing films simply to mix things up. While I was enjoying some of the films I started to keep an eye out for the things that tied the films together.

Should you see the collection? If you are a fan of animation and don’t mind being up late on a Sunday give it a shot, if not you can skip it. 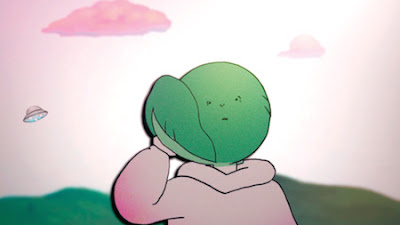