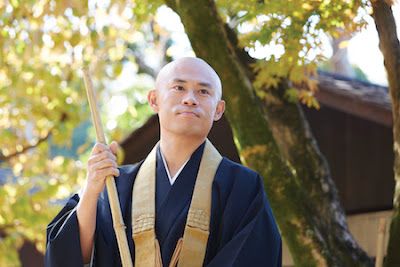 I AM A MONK is one of the reasons Japan Cuts exists. Highlighting small films which would probably not get a big audience if released widely in the US, Japan Cuts points out films that really need to be seen. I Am A Monk needs to be seen.

Based on an autobiographical story by a monk, the film tells the story of a young man who takes over the family business, running one of 88 temples on the trail used by pilgrims seeking enlightenment. We watch as he tries to find his footing handling the daily prayers and the daily grind of actually administrating the temple. It is a humanizing portrait of the men and women who have chosen the religious road for life since we also see him blowing off steam, getting drunk and hanging out with friends. This is a wonderful peak behind the curtain of a religious life, probably all religious lives. What I like is that the film gives us the sense he is just this guy like us.

I think this is one of the best films at Japan Cuts and I recommend it…with one proviso, the pacing is methodical and very deliberate. The film has been described as plodding by some other reviewers and it’s a criticism I can’t argue with. However at the same time the pacing matches the ebb and flow of life at the temple. This is life and this is the way it goes. The pacing is also a reflection of meditation.