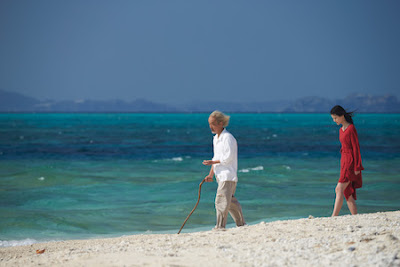 To some degree more form over content THE SHELL COLLECTOR is an often heady more frequently hypnotic tale of a blind shell collector and the things that was up on his beach.

A blind professor spends his days collecting and cataloging the various shells he finds on his beach. When a woman washes up on the shore, she ends up cured by a sting of one of his shells. This then brings civilization to his door as the world thinks he's got the cure to a mysterious disease

Meditative film ponders the relationship between man and nature. It also ponders how people will strive to get what they need. Full of beautiful imagery the film pulls us in and sucks us under in a variety of unexpected ways. There is always some kind of sensation , either visual or aural, to delight us. This is a film that is a pleasure to see and experience.

If the film isn't quite an absolute delight when  you walk from the theater, some of the plotting feels rushed, it will remain a film that you will want to return to and share with friends simply because there is something so absolutely haunting about it that you'll find you need a return visit to get recharged up.

One of the highly recommended films at Japan Cuts.

For tickets and more information go here
Posted by Steve Kopian at July 15, 2016