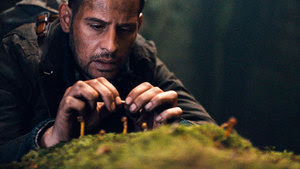 Hot shot pharmaceutical lawyer takes over a new company and in the process sets in motion his down fall as a suicide, divorce and a trip on drugs that make him violent leave him feeling even more disconnected

Good, gripping but ultimately unremarkable thriller is entertaining but nothing you need to rush out to see.  While there is no doubt that my viewing of the film suffered from seeing it in the middle of the mostly excellent Fantasia, I'm still not sure that I would give the film a major bump up if I had seen it purely on it's own terms. The trouble is that the plot for all the sturm und drang isn't anything we haven't seen before and you pretty much know early on where its going to go even if you may not know how.  It also doesn't help that the thematic elements and deeper meanings aren't that deep.

Disappointments aside this is a good little film and if you run across it definitely worth trying-and you don't even have to be in a forgiving mood.
Posted by Steve Kopian at July 24, 2016