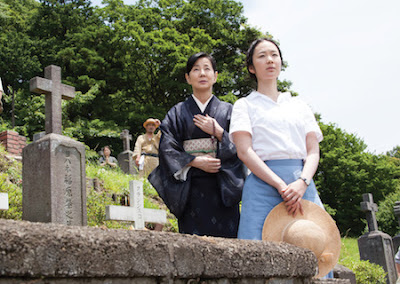 Award winning film has the ghost of a medical student killed in the Nagasaki bombing returning to help his mother and fiance get over the loss  they feel at his passing.

Earnest and heartfelt movie strives very hard to be a grand message picture that is about something important. It the kind of important films that Hollywood used to turn out in the late 1950;'s and early 1960's. It's little wonder that the film has walked away with a boat load of awards.

While I like the film a great deal, even to the point of being moved by the ending I knew was coming, I did find it's 130 minutes of talk a bit much in the context of a motion picture. While not intended to be a stage play, the film very much feels like one  since the film is little more than long conversations between the characters. This is not a knock against the film, rather more an attempt to illustrate that what is a very good story on the cinema screen would make a most excellent story on the stage.

If you like dramas of the sort they don't do any more grab yourself a ticket and go.

For tickets and more information go here.
Posted by Steve Kopian at July 14, 2016