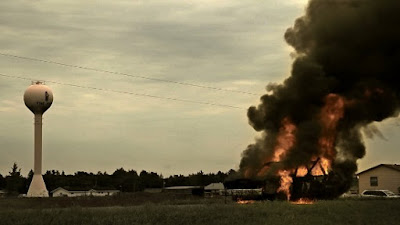 Opening Friday at New York's Metograph is the Terrence Malick produced documentary THE SEVENTH FIRE. Its a powerful documentary that you have to stay with early on before it hooks you and drags you to the end.

Returning to the White Earth Reservation where he filmed an earlier short documentary, director Jack Pettibone Riccobono turns his camera over to following Rob Brown a man who has been in and out of prison numerous times and his young acolyte of sorts Kevin Fineday over a several year period. As Rob heads back toward prison he sees Kevin heading down the wrong road and has to figure out how to stop the inevitable.

Filmed over several years the film is an unevenly chronicled portrait of some people living in extreme poverty for whom crime and the "dark side" is the only option. We drop in now and again and play catch up with their lives and what is happening. Its all largely verite as things are not really explained and we are left to piece it all together.

A beautiful to look at film, its easy to see why Malick got involved with the project. One could almost see him directing a live action version of the film without too much trouble.

I really like the film a great deal. this is a window on a world I know nothing about and am utterly fascinated by.

If the film has any flaws its the uneven presentation. Some sequences are much too short, a few other could have been trimmed. There is a sense at times of wanting to know more.

However, ultimately the film is a kick in the ass and highly recommended when the film begins it trek around the country in theaters.
Posted by Steve Kopian at July 20, 2016