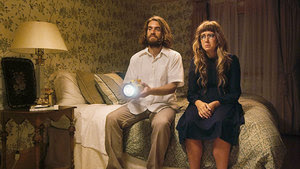 Eclectic science fiction comedy drama romance  that changes by turns into something special.

William Koda is an odd duck. A single guy who is trying to let the world know of the government cover-up of aliens, he is also prickly enough that there are not a lot of people who would put up with him. However after his one friend suggests he make a movie of this life, the better to get word out, he meets a waitress who is an actress and he decides to give the movie idea a go and then things begin to happen.

Part comedy, part romance, part science fiction film, part character study MAN UNDERGROUND is not easily classified. One of an increasing number of films that are portraits of jerks forced to change this is one I would actually want to see again. Thank the cast, thank the writers and thank the directors for giving us people we like, even Koda. Saying that is a big deal because more times than not with films like this we never like the person the film is about and we kind of wish bad things would happen to them. That's not the case here,we want it all to be okay.

The film also gets points because what happens isn't what you expect. There are a couple of turns here that made me sit up and go "hello"

I really like this film a great deal. Its a film that has grown in my heart the more I think about it. This is the sort of film that is what independent cinema should be doing, making films that surprise and delight you as they go along and do so in completely unexpected ways.

Speaking as a person who had almost no intention of seeing this film, this film is one you should see and it is highly recommended

The film screens again at Fantasia on August 3rd  so go see it. For tickets go here.
Posted by Steve Kopian at July 24, 2016