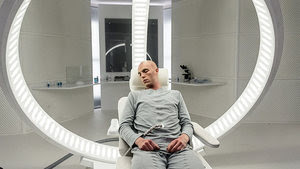 Like Marc, the subject of REALIVE, the plot of this film has been brought back from the dead perhaps once too often. Its not a bad film but there isn't much new here.

The plot of the film has Marc brought back from the dead. Decades before he committed suicide when he found out he was dying of cancer. The plan was that he would be brought back in the future and given a new life. In 2084 he is brought back his body regrown and his memories returned to him, but all is not as it should be...

As I said above this isn't a bad films but we've been here before. The film echoes films from FRANKENSTEIN (especially the underrated recent version by Bernard Rose), SECONDS,  THE ISLAND, SLEEPER, and at least a dozen other dystopian films in one way or another. The notions of creating a limitless future, corporate ownership,  the callousness of researchers and what it means to be alive have all been done before. Even the costume and scenic design echo other medical and dystopian science fiction films. There is so little I haven't seen before that while watching the film I pondered what was so special about the subject that made people want to make this film.

I couldn't come up with one.

The one new thing in the story is the paralleling of Marc's present with his past. Probably close to half of the film is flash back and it acts as a kind of commentary on his present situation. The funny thing is the flashback material is actually stronger and more interesting than the mad doctor creates a new body story. Here at least, the the notion of someone dealing with a terminal disease who chooses to plan for a future via extreme means is something  we haven't really seen before, or if we have it's not with the frequency of the rest of the story. That should have been the story but it gets lost because we have to deal with the weaker material of the resurrection.

Worth a look for hardcore science fiction fans or for those interested in intriguing misfires.
Posted by Steve Kopian at July 28, 2016