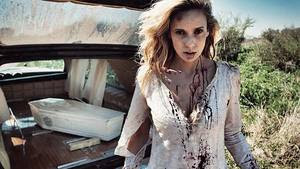 Sometimes it's better to be dead


We will see each other again when you find the white coffin.

I found it and it's a kick as adrenaline fueled rock to the moon.

Mother taking her daughter down the road to a new life stops at a rest stop and has her daughter disappear.  Chasing after a car she believes has her daughter in it she begins a dangerous game that will force us to ponder if sometimes the things we do  to keep our loved ones safe are better left undone.

Hitting all the tropes of the wild and crazy horror films of the 1970's and 80's with their choral music, rear screen projections, cars that get a flat by the cemetery this film knows that much of the film isn't breaking new ground, but it dresses up the early stages with some awesome set pieces (the flat, the car chase) that hold our attention before the film  flips everything and takes us into real nightmare territory with an ending that is more than just a little f-ed up. This is the sort of film that some of the desert horror films from 40 years ago like RACE WITH THE DEVIL or THE DEVIL'S RAIN might have been if they took things too far.

What an absolute delight this film is for a hardcore horror fan. This is a film that doesn't skimp on the blood and violence and it mixes it up with enough strangeness to keep you knotted up on the edge of your seat.

One of the real joys of the film is also one of it's curses. Running a speedy 70 minutes this film moves like the wind. The brief running time is a plus since it forces the film to run at full speed from start to finish. There is no time to take a breath or ponder what is happening because the film is moving so damn fast. The problem is that the film runs 70 minutes which is going to make a theatrical release, at least in the US difficult if not impossible- which is sad because this should be seen on a big screen.

Still there should be lots of festival screenings now that the film has premiered (Oh please Lincoln Center pick this up for Scary Movies)  and of course home video.

One of the real delights of Fantasia 2016. If you love horror especially action horror track this film down.
Posted by Steve Kopian at July 18, 2016