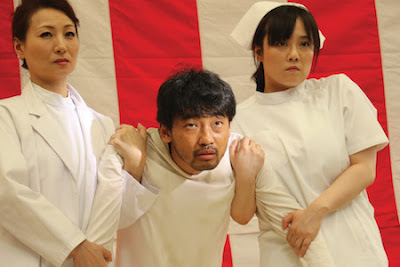 Masao Adachi's art film is going to be one that splits the audience. This work of confrontational art is going drive many people from the theater and make them ponder what sort of person would schedule crap while others are going to connect with it and think it' great.

The basic plot has a guy go into mall and sit down and fast. He refuses to be movedMeanwhile the act is interpreted by various people in differing ways and we get side pieces that are supposed to highlight the main ideas.

Personally I found the film a tough go, with everything intentionally obtuse and striving to be deep and meaningful. My instinct was that its pretentious twaddle. I would dismiss the film out right except that a friend of mine who shall remain nameless sung the films praises and said that he had wanted to run the film at his film festival but knew it was going to a film that was going to have a small audience and result in lots of complaints by people who didn't get it. For him it was a masterpiece of the highest order- praise he rarely gives, and not to films as challenging as this.

Your're on your own with this one- but recommended for those who want their films challenging and more the multiplex fodder.
Posted by Steve Kopian at July 18, 2016