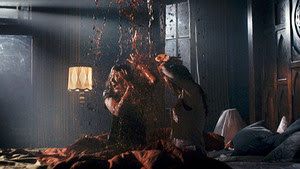 The film begins when a tree used for a sacrificial site is cut down and turned into a bed. Years later the bed is in a sex club, and when the club burns down the police begin to investigate - meanwhile in flashback four friends go into the sex club for a party only to find that the bed is alive and evil and won't let them leave and is going to make them pay for their previous misdeeds.

Good little horror film has some creepy moments and some really messed up images like what the hell is that that thing on the ceiling? Its a film that preys on our childhood fear of their being a monster under our bed and turns it into an adult nightmare.

The best thing about BED OF THE DEAD is that this is a horror film that manages to over come some logic problems (say like if the club knew the bed was evil why did they let anyone use it, or even have it?) the longer as it goes on simply because it gets us caught deeper and deeper in it's web. There is a point about a half an hour in when we are so caught up we accept the film's intentionally overly obtuse logic. Its just a weird horror movie and we want to see what happens and who dies next.

My only real complaint with the film is the feeling that this would have been a better film if the scares and jumps weren't accompanied by the soundtrack going to 15 on a scale of 10.  The film is good enough that that it doesn't need to have each scare punched up so much that the edge is taken off the suspense.

Recommended once this gets a wide release.
Posted by Steve Kopian at July 17, 2016