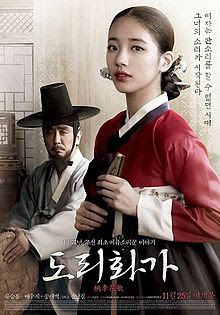 K -pop singer Bae Suzy plays Jin Chae-sun, the first female pansori singer, Jin Chae-sun. Chae-sun desiquised herself as a man to learn how to sing pansori and she is forced to perform for the Prince in order to remain alive when it was discovered that she wasn't a man.

SOUND OF A FLOWER is dramatically uneven. while possessing several deeply moving sequences, the set up of the story will wow you, the film falters here and there as the most excellent bits crash into the just okay one.

Perhaps the biggest problem is Bae Suzy as Jin Chae-sun. While I understand that she is a professional singer and that she studied for a year to learn pansori (its a mix of blues and opera) vocally she is all over the place making one wonder if she really was in a position like the young lady she played, if she would have survived. She isn't bad, she's just very uneven. As an actress she is excellent and I hope that she gets film roles, but singing in a style that appears to be outside of her normal one works against the film.

On the plus side the film is always stunning to look at and while we know more or less how it's all going to come out (she becomes the first singer so we know she doesn't die) there is enough suspense in the rest of the twists and turns to keep us watching to the end.

For tickets and more information go here.
Posted by Steve Kopian at July 04, 2016