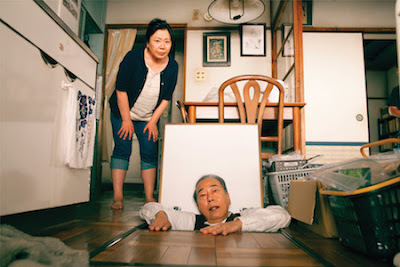 Old couple move into a new apartment block. As they settle in and get into the routine one of them goes missing. Rumors fly and....well that will be telling.

I'm not going to really say much about the film, A dry absurdist shaggy dog story is more about the journey than the destination. It's the interaction between characters that is important here because where the film is going, is unexpected to say the least.

I like the film but I don't really love it. Its a quietly off kilter film that you're either going to  love or hate, its a film for those who like Japanese quirkiness. If you're one of them give the film a shot hen it plays at Japan Cuts

For tickets and more information, go here.
Posted by Steve Kopian at July 12, 2016