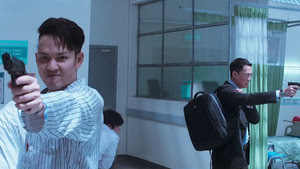 A doctor having a bad day, her surgeries have been going wrong lately to the extent one patient is constantly threatening to get her, finds things going worse as the police bring in a bad guy with a bullet in his head who wants the hell out. He refuses surgery knowing his gang is going to come and get him so it becomes a waiting game.

Odd mix of character study, medical drama and police thriller is a kind of throw back to the Hong Kong films of the 1980's and 90's where genres mixed and seeming dramas would turn violent or action films would have lead ups that made you wonder where things were going. Its a mix that you're either going to love or hate.

As a nostalgic throw back to Johnnie To's early career I kind of liked THREE. While in no way on par with his best films, its kind of nice to see that he can still handle what amounts to a chamber piece after so many big blockbusters (though there is one hell of a shoot out t the end).

For fans who miss the old days of Hong Kong Cinema or for those who want a slice of crime that isn't like all the rest this is recommended.

The film screens again at Fantasia on the 18th and  is also getting a second run at Manhattan's Metrograph theater this week.
Posted by Steve Kopian at July 16, 2016