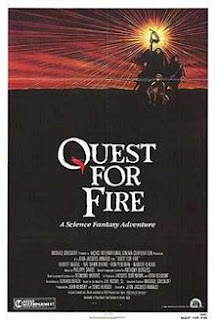 I’m old enough that I saw QUEST FOR FIRE in the movies. When the film came out it was a big to do with director Jean-Jacques Annaud working with Anthony Burgess and Desmond Morris to create reasonable vocal and body language. The film was loved by many, others thought it was too arty, and pretty much everyone laughed at the sex scene where the missionary position was discovered.

My biggest memory of seeing the film in the theater all those years ago was being aware of the sound design. This was a film where the sound wasn’t just left and right but all around the auditorium. It was cool and began my interest in movie sound.

The story of a two early humans who go looking for fire when their tribe’s fire has gone out is just a grand adventure. Transcending this is a universal story that’s expertly told. Along the way the two men pick up a woman who actually knows the secret to making fire. The trio then must face various dangers to get home.

This is one of those small films most people don’t think about but which sent shock waves through the film industry. The naturalistic/documentary form of story telling was noticed by many in the main stream and some films became less Hollywood. The film became a watermark in how similar films are viewed. When Jane Auel’s CLAN OF THE CAVE BEAR was turned into a film a couple of years later it was savaged for reasons that included the fact they didn’t take QUEST FOR FIRE’s approach. And the film gave us Ron Pearlman in his first big role.

The film itself has haunted me. It’s a film I return to time and again. It’s a film that while not perfect is so self contained and so documentary like that the film seems real. We feel as though we are there and watching actual events. It's a film that plays better on the big screen where the world falls away and you fall into the world on screen. I think I love the film because I fell into the ancient world 35 years ago...

...which is why if you're in Montreal because you really should see this film big and in the dark.  Even if you've seen the film before but not on TV you need to see this at Fantasia because this is a film that grows exponentially better on the big screen. Trust me you don't know how good this film is until you see it big.

Go see this film at Fantasia.

For tickets and more information go here
Posted by Steve Kopian at July 19, 2016