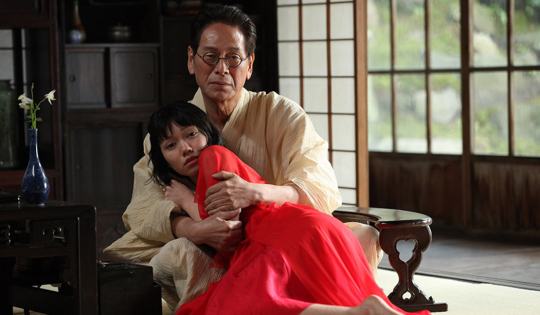 The second film screening at this year's Japan Cuts at New York's Japan Society is a must see for anyone who doesn't want to see your typical film. Its a charming fantasy that will touch your heart and will get you talking about it for hours afterward with anyone around you.

Simply put this is a must see film.

The story concerns an elderly writer who is having a sudden burst of creativity. Its do in large part to the young woman he is living with, however she is no really a woman but a goldfish in human form. Things get complicated when the writer's former lover shows up despite having been dead for 12 years.

Whimsical, deeply compelling, and full of more ideas than is allowable by the American film studios this is a wonderful film that hits you in the head and the heart. This is one of the few films that moved me deeply and had me wishing I had seen it with a bunch of my friends so we could have gone some where and discussed it.

This is a gorgeous film that makes rippling sheer orange and red fabric a must for women everywhere.

I love this movie. Its so full of ideas that I need to see it again in order to parse them all out. And then there is the question of what exactly is the film. Is it reality or the last work, last thought of the writer? Of course I just want to see the film again because its so good.

If you love movies - especially that are atypical and are heady- and kick you in the heart - you must see this.

Bravo to the Japan Society for beginning with a wonderful gem.

For tickets and more information go here
Posted by Steve Kopian at July 08, 2016