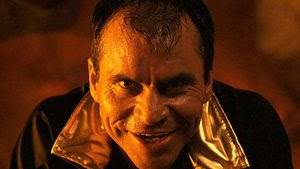 You're on you're own with this one boys and girls

A brother and sister enter a warehouse and get hooked up with an abusive ogre living there. The pair fulfills the mad man's fantasies breaking all sorts of taboos along the way.

Graphic sex and violence fill this pretentious meditation on god, the universe and society. Its a film that is intent on poking the audience in the eye and kicking them in the nuts simply because it can. I'm sure that director Emiliano Rocha Minterwill tell you it has some deep meaning, as will its supporters but beyond the blatantly obvious I don't think this film means anything. Its a beautiful disturbing... pretentious turdball.

Don't get me wrong I think Minterwill is a brilliant director, this film wouldn't be as disturbing if he wasn't, but there is nothing beyond it. Its not like a thrill ride, this is a film that wants more but fails to achieve it. Yea your buttons will be pushed. Yea you will be disturbed but  to no end.

Worth a look for those who want to be see an f-ed up film, all other need not apply
Posted by Steve Kopian at July 26, 2016