Written directed and animated by Alain Bidard, BATTLE DREAM CHRONICLE is a mixed bag. While most certainly a crowning achievement when you consider that Bidard did it all pretty much alone, he film is not going to have a universal audience, with the film probably best for videogame fans who don't mind watching other people play games.

Set in the online world of Farandjun, an online world into which the entire real world has more or less disappeared, thus giving them a kind of immortality, the status quo is under attack, literally, as the cyber being Ifret stages her final attack and takes control of the world.  Ifret then forces the leaders of the world to fight in Battledream to the last person with the winners getting control of the world.

Give the film points for being largely female centric with a wide variety of ethnicity (the heroine is a black woman) and give it more points for often being visually stunning.  However take a number of points away for being rather dull.

I'm sorry this film is the cinematic equivalent to watching a video game, Yes there are characters but they only get fleetingly development with the film giving most of the time to set piece of "game play".  What little character development is not very deep, mostly its just motion with everything designed to get to the next set piece. Worse any exposition seem to come in blocks to fill th pause between battles. By the half way point I was bored and started doodling in my note book waiting for something to happen.

I feel bad not raving about the film because here at last is an animated film that goes beyond what is expected from a film of any sort (I mean how many black women are kick ass action heroes?) and on top of that director Bidard did the film alone, a feat which should be celebrated. Sadly the film is just not very interesting unless you are a gamer so anything special gets washed away by the boredom.

One of the few disappointments at Fantasia. 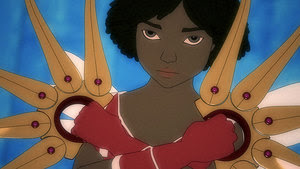