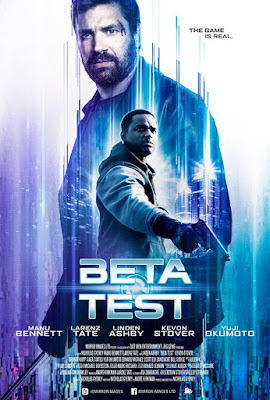 Beta tester for a game company Sentinel begins to have a weird experience when he discovers that the game he is testing is somehow connected to the real world. More to the point the villain of the game is the Sentinel's owner's former friend and head of security- who is on a mission like in the game to save his wife.
One of the years big surprises, BETA TEST is one of those films that comes from a seemingly spotty source that makes you not rush out to see it, it was released a week ago, but turns out to actually be way better than you expect. I'm guessing the fact it is good is the reason the film got  larger than typical theatrical release. The truth is that the mere fact it got any theatrical release says volumes- that it was in theaters across America says more.  Actually the really amazing thing is that numerous friends,many of whom would never touch a film like this have seen it and have been telling me how good it is.

And it is a good.

A rip roaring B thriller of the sort that they don't do well any more BETA TEST is one of those films you want to curl up on the couch with.a bowl of popcorn and some friends. Its full of heady science fiction ideas, political thrills and bone crushing action.

Its the action that is going to stay with you, its bone crushing and nasty in ways that most films never manage. Manu Bennett stars as Creed, the former head of security and while his vocal performnce is mixed- his physical one kicks ass. He has physical presence and he fights like one of the best action heroes.  He's amazing.

While far from perfect BETA TEST is entertaining as all hell and so is very recommended.
Posted by Steve Kopian at July 26, 2016