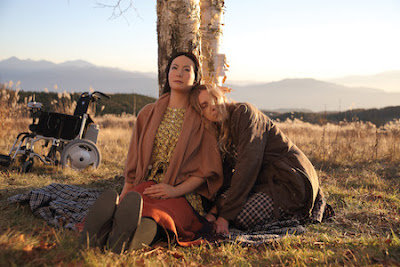 In the running for one of the most pretentious pieces of trash of the year SAYONARA plays like what it is, an adaption of a stage play, opened up is such away that the static scenes take place in real locations. You know you're in trouble when the most interesting thing in the film is the robotic actress who reprises her role from the stage play.

Following a nuclear disaster, Japan faces evacuations and re-settlements.  Tanya, a terminally ill South African woman living in Japan is at the bottom of the list. As friends come and go, and the inevitable approaches, she is left mostly in the care of her robot Leona.

Long sequences of meaningful silences are interspersed with long take scenes of the play. Its all so meaningful in the wrong sort of way.  Yes we are supposed to feel the slow tick of time, yes we are supposed to ponder the aftermath of 3/11 and 1945, but life isn't this static. Worse people don't speak in ways that  are full of meaning and explanations that are only necessary in poor stage plays. These people live in the world of the story so they don't need things explained.

I wanted to scream...and I did frequently...usually "will you get on with it!?!"

I should have let the damn thing lull me to sleep.

The most interesting thing in the film is the robot created by Hiroshi Ishiguro named Geminoid F. A largely lifelike creation she is moves just oddly enough to make you wonder what the deal is- its a machine and not a person.

Recommended only for those who like pretentious twaddle and slow static films that seem to confuse silence and inaction for deep meaning especially when covering material that worked better elsewhere.

For the hipsters and those loving overly arty films with pretensions of grandeur More informtion and ticket can be found here
Posted by Steve Kopian at July 11, 2016