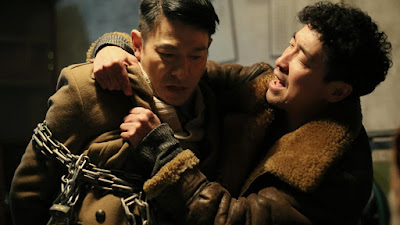 Based on the story of the abduction of one of the film's cast, Wu Ruofu, SAVING MR WU is the story of what happens when a gang of kidnappers pretend to be cops and kidnap a big name star, played by Andy Lau.

Told out of order, the film begins with the kidnapping. It then flashes forward to the point where the police are interrogating one of the kidnappers. They know they have their man, but they are also keenly aware that if things don't proceed quickly Wu will most likely be killed.

This is a solid little thriller. Its not in any sort of way an action film, this is in reality a police procedure/crime or hostage thriller. We are very much focused on what is happening to Wu and the police efforts to try and find him.

I'm not entirely sure if the jumbled time line completely works. Don't get me wrong the film is full of tension, but because of the jumbling there are certain bits which we are aware of a tad too early. We know that certain events we see when the film dives back in time are not going to be completely black, For example since Wu Ruofu is in the film, he plays a police detective, we know he survives. This should have been tenser, but while I'm not sure jumbling the time frame works, I'm not sure a straight forward telling would have worked either. Either way this is just a damn fine story.

My nit picking about the time frame shouldn't be taken to impy in anyway shape or form that this is a bad film, Its not, It's actually a tense little thriller with a really bad guy at it's center. What's scary about the kidnappers isn't so much what they do, its their careless and carefree attitude that's scary. I mean they are willing to off the poor schlub they kidnapped before Wu simply because they screwed up and simply assumed he had money. Life really is cheap to these guys.

This is one to track down and see. This is a perfect popcorn film.

For tickets and more information go here.
Posted by Steve Kopian at July 07, 2016