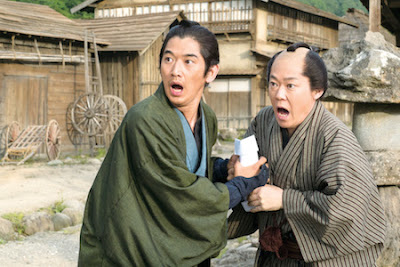 Yoshihiro Nakamura is one of my favorite directors. He is also a loved by Japan Cuts who have screened most of his films from A FISH STORY to GOLDEN SLUMBERS to SNOW WHITE MURDER CASE to CHIPS to the awesome  A BOY AND HIS SAMURAI. If Nakamura has film it seems Japan Cuts will screen it and I will see it.

The latest one to cross the Pacific and North America is THE MAGNIFICENT NINE, a low key charmer that will probably put a smile on your face.

The plot of the film has a poor town dying from the lack of money.When a young man who wants to sell tea returns home to find poverty he muses about the way to get some money to save the town. He casually suggested that if the town raised a certain amount of money they could loan it to their cash strapped lord and collect interest and save the town. He didn't expect anyone to take him up on it, especially if they went about it the wrong way it could end up with everyone in serious trouble.

Based on a novel which was based on an actual even THE MAGNIFICENT NINE is a sweet little gem. Relying on the situations to bring smiles and laughs, there are no real jokes as such, the film is a low key and dead pan film that feels more like life than a movie. To be certain this is a film, but it never goes for the big gag rather it simply plays out as life would. Its a film you have to give yourself over to allow it to do what it does. It also a film where you have to watch the faces  since many of the laughs come as people react to what is going on around them.

I really ike this film a great deal. It made me smile and feel really good about people. And while it may not be as great as the best of the director's other films it is much better than most other directors best films.

Recommended when it plays Saturday at Japan Cuts in NYC.

For tickets and more information go here.
Posted by Steve Kopian at July 13, 2016