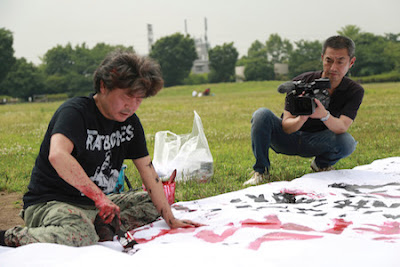 Documentary portrait of the great director is a rambling in your face look at all things Sono. We watch as he talks, paints and creates. We are also treated to insights from his collaborators.

Probably the most cutting edge film at Japan Cuts (even with actual Sono films screening) the film takes an atypical, fly on the wall, grunge tact in documenting it’s subject. We are there as he goes through his paces and it’s a thing to behold. Its Sono the mad genius holding court.

It’s interesting for a while but the often no-tech style wears on the viewer. While I like that we got to see Sono talking at length, there were a couple of times when he went on too long. It’s much too jagged a film that looks at times like a home movie in the wrong sort of a way with the result Sono can seem like he’s playing to the camera rather than being

At the risk of getting booted from Japan Cuts I found that Sono’s statement about how Japan applauds things that don’t embarrass odd because it's screening in a normally  envelope pushing festival that this year, that aside from one other film, is extremely sedate and in no way will rock the boat. How odd that a film about a provocateur is more more challenging than the films screened with it?

For hardcore Sono fans only.