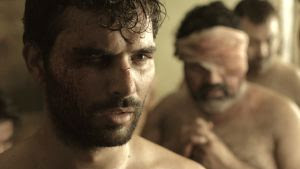 Felipe Rodriguez's KIDNAP CAPITAL  is a tense little treat. A frightening tale set in Arizona this is a film that will keep you on the edge of your seat as you wonder who is going to survive

Plot of the film has bad buys kidnapping illegal immigrants right after they make it to the US. Holding them in a room they tell them if they don't pay 2800 they are to remain. The bad guys then begin to pit them against each other while one plots his escape.

Solid film works for any number of levels not the least of which is that Rodriguez was smart enough not to try and paint the story on too large a canvas. By keeping things in a very few locations the film feels boxed in and we aren't allowed to wander with our thoughts (something a couple other Fantasia films allowed to happen to their detriment.) The cast is also first rate and they manage to sell the pain and suffering

To be honest this briefly ended up on a list of films I was going to not cover at Fantasia because there was too many films and not enough time. In desperation I decided to do away with films that didn't speak to me instantly. I crossed the film off until a letter from the PR people from the film changed my mind- and I'm glad it did because this is a solid little film worth the effort to see it.

One the best surprises at Fantasia.
Posted by Steve Kopian at July 31, 2016