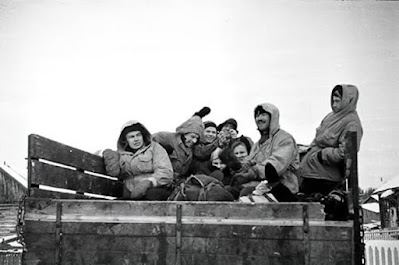 This is director Liam  Le Guillou's look into the story of the Dyatlov Pass Incident. Its an attempt to get to the bottom of what happened to nine students who were found dead in the Russian wilderness, their tent torn apart, their clothes removed and wounds on their bodies.
There have been numerous attempts to get to the truth of what happened but no one seems to have an answer. This being a Soviet era tragedy there is a belief of a coverup. Add to that there were errors in the official record, and strange images on the film the students shot have lead people to speculate all sorts of things from aliens, to bigfoot, to a military project gone wrong, to poisoning to murder.
Guillou wades into the mystery  by going to Russia to talk with researchers and to see the actual reports. Its an interesting journey that is more grounded than some of the American TV and You Tube films on the subject.
I had never heard of the Dyatlov Pass Incident until relatively recently. Despite being a 60 year old mystery it was off everyone's radar until about the time that Discovery or History ran film talking about how it was a Russian Bigfoot tale, I say this because I was curious why no one had really discussed it and I found that  until the special no one was talking about it in English. Since then thee has been an explosion of material on the subject.
Guillou's film is quite good. Scoring points by actually being filmed by himself in Russia, it carries a bit more weight than some of the slickly made cable docs or the cut and paste You Tube recounting videos. To be certain its a bit rough, he went without a real crew, and it is a bit long, its a hair under 2 hours, but it is well researched and compelling. I like that he doesn't take everything at face value, for example an error in a date in one lace has fueled all sorts of speculation of a coverup, but Guillou explains where it comes from. I like that he makes an effort to go to the site of the incident so that he can really understand what happened.
Does Guillou sort it all out? I don't know, but he does make a compelling case for his theory.
AN UNKNOWN COMPELLING FORCE hots VOD on June 15th and is recommended for anyone with an interest,
Posted by Steve Kopian at June 11, 2021