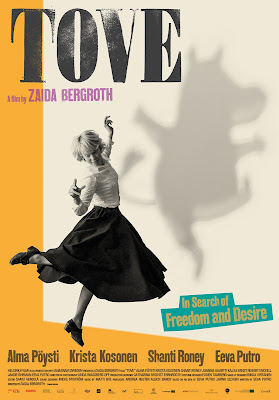 You know Tove Jansson’s work, even if you don’t know her name. As the creator of the internationally beloved Moomin books and comic strip, she has achieved a legacy many can only dream of. That wasn’t necessarily her intention, though.

Zaida Bergroth’s loving and lyrical biopic, Tove, is a look at Jansson’s adult life as a struggling artist and a woman realizing her place in society and her sexuality. It only deals with about 10 years of her life -- from the end of World War II to the mid-60s -- but those were the most pivotal.

I appreciate that Bergroth doesn’t bother with any scenes from Tove’s childhood. We quickly find out her father is a sculptor of some acclaim (her mother also was a graphic designer and two of her siblings also became artists). While the movie doesn’t hammer this point, it’s definitely about Jansson’s struggle to be recognized as a serious artist -- not only by the wider public, but also by her father.

Alma Pöysti gives her portrayal of Tove a kind of steely sweetness. She’s both young and old, playful and harsh. She looks enough like Jansson that she can disappear into the role without it feeling like an impersonation.

A lesser biopic would make Tove’s conflict over the Moomins much more than it was. She clearly had great affection for the characters (who were, more or less, based on aspects of herself, her family members and other loved ones) but mostly just thought her work there was a bit trivial to her more “serious” work. Instead, the movie is mostly about Jansson’s conflict between the work that may make her money and the work she wants to be known for. The movie doesn’t push it, but it’s clear she took on the Moomins comic strip because it was going to pay well. She eventually handed it over to her brother, Lars.

Tove had relationships with men -- most significantly in the movie, with politician and philosopher, Atos Wirtanen (Shanti Roney) -- but her longest relationships were with women. The movie focuses mostly on her on-again, off-again affair with theater director Vivica Bandler (Krista Kosonen). Vivica’s glamour and poise was clearly a draw for Tove and despite Vivica never quite being able to give Tove what she needed, she supported her and adapted Moomin stories for the stage.

There is so much of this movie that could fall into overt melodrama or tragedy, but Bergroth just brings kindness and empathy instead. Pöysti’s energy is perfect for this movie. It has all the beauty of a period piece but it never descends into their cliches.

The movie ends soon after Tove is introduced to the woman she’ll end up spending most of her life with, Tuulikki Pietilä (Joanna Haartti). So while we don’t get to see much of their lives together, that feels fitting. Tove is just a glimpse into a relatively short period in one woman’s long life. Jansson may be the most well-known for the Moomins and for most, that may be enough, but I like knowing her life was richer and fuller than just that.