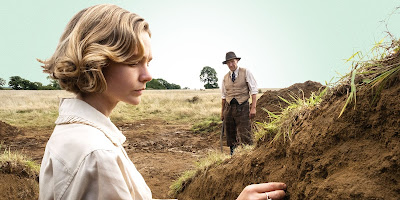 Based on a novel that reimagines the dig at Sutton Hoo where a buried ship was discovered in 1938. Land owner Edit Pretty asked Basil Brown to excavate the mounds on her property and history was made when a buried ship was found intact.

Ralph Fiennes stars as Brown and Pretty is played by Carey Mulligan. Both give Oscar worthy performances.

Mulligan, a woman who is chameleon like in her creation of characters, I can't ever say what a typical role for her is or what her voice actually sounds like,  is surprising as the wealthy woman who is certain something is on her land. Once more its an unexpected role that seems to fit her like a glove.

Fiennes is staggering in his performance. A role of physical ticks and moves, he seems like a world weary laborer who is way smarter then the gentry think he is, Watching him ride up to Mulligan's home I had no clue who it was. It is one of the greatest performances I've ever seen.

The story of the dig, and the swooping in from the big museums is compelling. While I could have used a little less soap opera, the side characters are less interesting than the leads I was still heartily entertained.

An unexpected gem, THE DIG is a must see especially if you are a fan of British drama