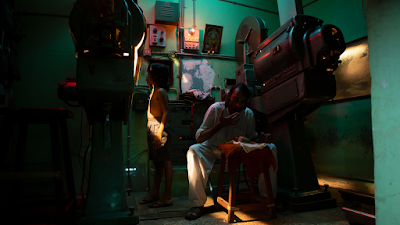 In the opening scenes of Satyajit Ray’s Pather Panchali (1955), a distant train appears as a vision of civilization for a young boy in rural India. A similar scene opens Pan Nalin’s The Last Film Show—a young boy named Samay plays around the train tracks near his village where his family makes a living selling chai and snacks to passengers at the local station. Just as the train hinted at a new life for Ray’s hero, so too does the train for Samay. But whereas the first pointed to a Western education, the one in Samay’s life took him somewhere very different: the movies.
It’s doubtful the parallels in these opening scenes were accidental, as The Last Film Show was based on Nalin’s own life, particularly his own experiences of falling in love with movies and deciding at a young age to make them. Though its English title is winkingly similar to a certain Peter Bogdanovich classic, the film is more closely modeled on Giuseppe Tornatore’s Cinema Paradiso (1988). Both draw on autobiographical details to tell stories of young boys who become enraptured with movies, adopt a theater as a home-away-from-home, start friendships with kindly movie projectionists, and eventually escape from their small towns to become directors.
But the two films are very consciously different in tone and execution. Whereas Tornatore’s film is a heavily melancholic meditation on memory, Nalin’s is a joyous expressionistic ode to artistic self-discovery. Through films, Samay literally discovers new ways to see the world. After stealing reels of film from Samay’s beloved theater with his friends, his gang bikes around town with colored strips of celluloid wrapped around their eyes, plunging everything into the same vibrant colors they see on movie screens. While trying to power a jerry-rigged film projector, the boys seemingly rediscover the sun itself and try to grab its light with their bare hands to run it with.
The film unabashedly fetishizes physical celluloid and treats the arrival of digital projection as an even greater tragedy than the death of the protagonist’s sister in Pather Panchali. But one feels that this isn’t born of Nalin’s nostalgia for physical film. Instead, for him and Samay, despite being ephemeral flashes of light, images have a presence and impact that demands tactility. Moving pictures aren’t disposable distractions, they’re dreams and fantasies given life. They’re what makes one worth living.
Posted by Steve Kopian at June 13, 2021