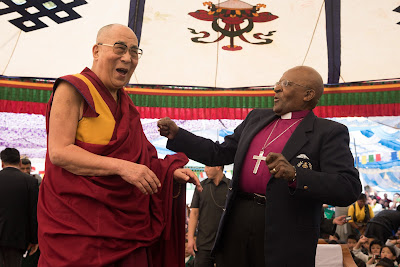 Based in part on the book that the Dali Lama and Desmond Tutu wrote together called The Book of Joy: Lasting Happiness in a Changing World. MISSION:JOY is structured around the meeting of the pair in 2015 when they got together for a week during which time they did an extensive interview.

While I absolutely loved watching the two friends talk and laugh and have a good time I really didn't care much for the rest of the film. For me seeing the two men of god laughing and joking and being little kids absolutely delighted me. It speaks volumes about how one can overcome the bad things in life and find hope. Sadly there isn't enough beyond that to make this film compelling.

A huge part of the problem is that we don't get enough of the two men speaking themselves. Other people impart what the two men are  trying to express. In a weird way it reminds me of some of the recorded lectures of the Dali Lama I've seen which have him say a few words which are then explained more fully in additional notes that were included with the DVD or video tape or by a person on stage with his Holiness. There are also long biographical sections on each man, and additional points such as how brain scans indicate how are minds work which while informative doesn't really feel to be on point.

Forgive me if I seem cranky, it's not that I think the film is bad, more that the title isn't really what the film is... then again taking the film on it's own it still kind of felt it was a long slog.