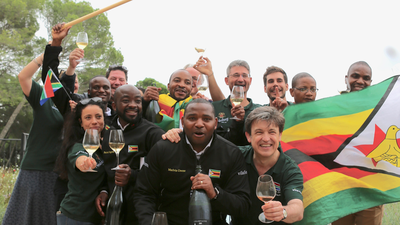 This is the story of Joseph, Tinashe, Marlvin and Pardon four Zimbabweans who left their  homeland for a better chance at supporting their families in South America. Not knowing each other  they end up meeting over their developing love of wine.  Despite it sounding totally insane they form the first Zimbabwe team to compete in The World Wine Blind Tasting Championships.
While the film is a heat warming tale of four guys who want to do something they love, the film also wrestles with a lot of serious questions, racism, immigration, politics and the notion of where our home is. While the film  refuses to be heavy, it wonderfully takes the challenge to engage our heads as well as out emotions.
I didn't go into Tribeca with BLIND AMBITION on my dance card, but lord knows by the end of the film I was emailing friends they needed to take a look at it. Its a film that is the cinematic equivalent of  hanging out with a bunch of new friends. I was absolutely enraptured.
I don't know what else to say beyond that except see it.
Posted by Steve Kopian at June 13, 2021