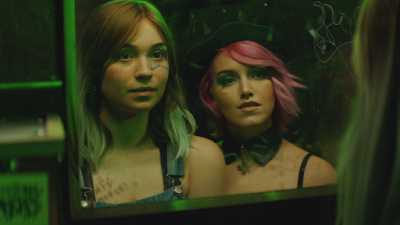 I've seen POSER a couple of times now and it provoked different reactions each time I saw it.  That a film can and does change with each viewing is a sign of something special. Too often filmmakers or artists make something that is the same on the 33rd time as it was the first time. It doesn't challenge you or shift as you see new things. POSER shifted before my eyes with each viewing and to be quite honest I don't know what I think or feel about the film, only that I feel the need to engage with it so that I can have so idea where I stand on it. That alone would make  it a film worth seeing even if it wasn't as good as it is.
The film is the story of Lennon Gates, a young woman on the outside of the music world looking in. She decides that her entry is to start a podcast. She goes to shows, speaks to artists and works hard covering the inde music scene. Along the way she meets Bobbi Kitten. Kitten is one half an up and coming duo and has her own agenda.
POSER rocked me the first time I saw it. I knew these people. Yes to be certain there is some heightening of the characteristics but I knew them. I've met similar people in art galleries and film festivals and small music shows.  More troubling is I went out a couple of times with someone like Lennon, the poser of the title. She wanted to be someone and she wanted someone to give her an entre into the world she imagined was better. She disappeared when she realized that I couldn't give her the connections.(She was also working on a piece called Posers)
The second time I saw the film I was outside of the film. I was watching the technical virtuosity of the film. The shot choices, the music, and all of the things that make up the film. My reaction was muted compared to the first time because I was looking at it differently and not seeing it with completely fresh eyes.
A third viewing had me seeing the film differently yet again and pondering what directors Noah Dixon and Ori Sergev were up to. My feelings for the changed shifted again as I started to pull the film apart thematically an pondered how and if it works. I also wondered if yet another viewing was in order. (Its is but down the road a bit)
Make no mistake, I loved the film but I am still wrestling with it some two weeks on from when I first saw it.
For me POSER is a puzzle of a film. It is a film that reminds me of people I've met. It's a film with a main character I can relate to, she is as obsessive about music as I am about film. It is an often brilliantly constructed film with great music and ideas. But it is also cold and distant. It doesn't always connect to the world (like Lennon). It is a film  that both seems to be genuinely about something and yet at other times or at other viewings seems to be a poser itself.
Is this a film something special unto itself or is it just a stepping stone the directors hope to use to move on? I don't know. I really don't but I can't look away and I can't stop engaging with it because for better or worse there is something there. (I think for better)
I suspect that some of you are confused about my reaction. You want to know should you see it or not. You want me to give you a definite thumbs up or down, or a number of stars but I can't do that. This isn't that sort of a film. This is a film you rate and file away, rather this is a film you think about and reconsider over and over again.  My answer is see it. See it because you will have to engage with it rather than let it simply wash over you.  See it because no matter what happens you will have seen something that sticks with you instead of disappearing. See it because its a film that people are going to be talking about for a long time to come.
Posted by Steve Kopian at June 11, 2021